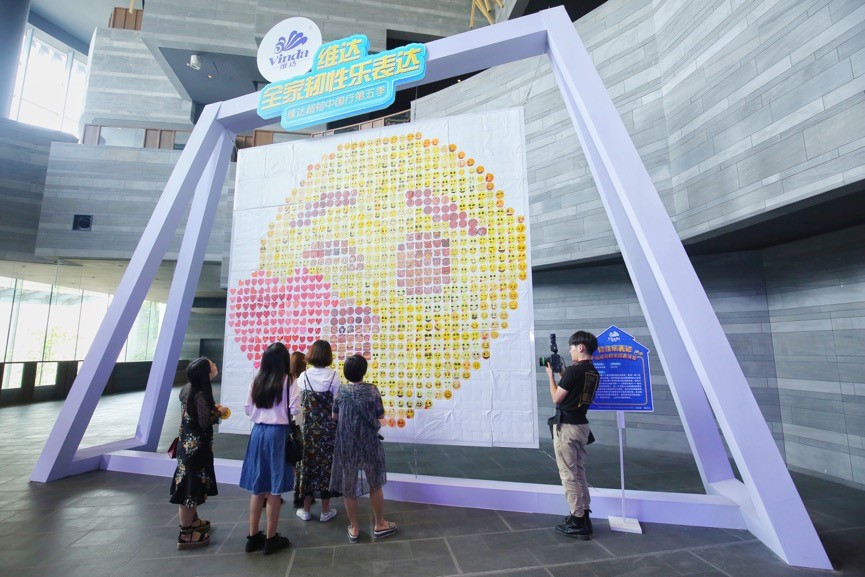 At the event, Vinda also cooperated with emoji, the major entertainment IP service provider, on the building of Vinda’s ultra strong emoji family park. Taking the opportunity of the Mother's Day, Vinda hopes that a greater number of Chinese families can begin the journey of happy communication between parents and children.

“Vinda Ultra Strong China Tour” is a large-scale interactive consumer campaign with the longest time span, the longest journey in kilometers and the largest number of families involved ever in the history of China's tissue industry. In 2017, Vinda’s Fifth Ultra Strong China Tour was kick started. Vinda will continue to work together with Institute of Population & Labor Economics of the Chinese Academy of Social Sciences in launching the initiative of “happy expression of strength for the whole family” to the community so as to advocate for happy parent-child expression among Chinese families.

On the day of the event which coincided with Mother's Day, Vinda joined hands with emoji to create the world's first emoji tissue jigsaw comprised of hand-painted drawings by more than 1,000 Chinese families in celebration of Mother's Day. Through this jigsaw, Vinda advocates for family co-creation to deliver the idea of “happy expression of strength for the whole family” in the parent-child interaction. This has made Mother's Day not only a festival for the mother but also a day of happy expression and interaction for the whole family.

Mr. Zhong Feng, marketing director of Vinda brand, said: “Vinda’s Fifth Ultra Strong China Tour will focus on expression between parents and kids, advocating for happy expression of strength for the whole family. This is because expression is the core that sticks the family together and the way that makes a family happy and fun. We hope that our cooperation with emoji - this big IP service provider with self-generated genes of happiness will make communication between parents and kids more fun and diverse.”

This piece of cross-over art created by Vinda and emoji, the world's first emoji tissue jigsaw, which will continuously be maintained by the Vinda brand as a valuable collection, will be displayed at the cities where the Vinda’s Fifth Ultra Strong China Tour event is carried out to reach out to more families on the “happy expression of strength for the whole family” without wasting any “ultra strong” Vinda tissue.

Being a Chinese actress famed for her fine performance, Jiang has always appeared as an independent, strong and genuine person on the screen. In daily life, she has attracted a large number of fans with her self-deprecating, playful attitude and inborn candid facial expressions. At the event, Vinda released an exclusive emoji expression of Jiang which she took part in the creative design and was later brushed up by emoji.

At the same time, an exclusive video showing Jiang’s imitation of all kinds of emoji expressions was be played at the event. In the video, Jiang invited both the live and online audience to take part in “Vinda’s Expression of Strength Contest”. She hopes that the activity can bring more Chinese families together in the “happy expression of strength for the whole family”. 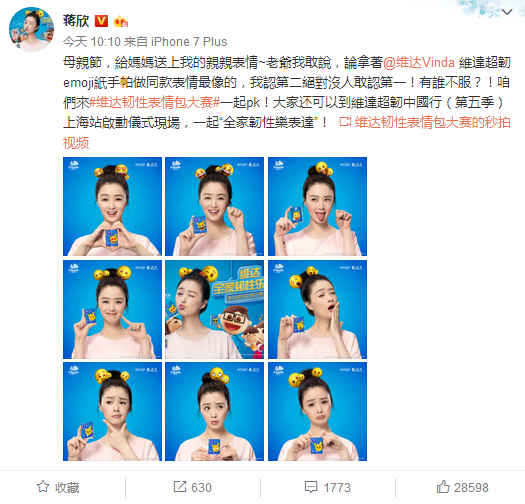 For the Ultra Strong China Tour this year, an ultra strong emoji family park jointly built by Vinda and emoji will set out on a tour in eight major cities in China, followed by successive launches in Chengdu, Hangzhou, Wuhan, Shenyang, Shenzhen, Guangzhou and Beijing. Vinda’s ultra strong emoji family park has eight big ultra strong experience zones and an emoji party, in addition to a wonderful parent-child graffiti tissue wedding dress show, integrating fashion and fun together to bring an unprecedented experience to both parents and kids at the site.

Leverage on interactive entertainment in showcasing the product, coupled with the scene-based experience to achieve parent-child interaction, Vinda’s Fifth Ultra Strong China Tour is scheduled to travel more than 9,000 kilometers for 64 weekend brand festivals in an effort to infiltrate the idea of “happy expression of strength for the whole family” in every family and develop the idea into a fashionable trend among parents and kids.